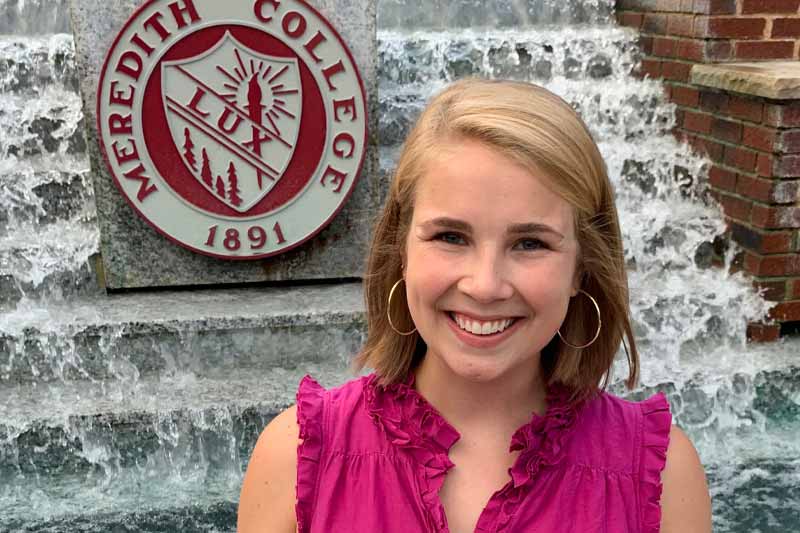 As early as her freshman year at Meredith College, Carol Jablonski, ’20 knew she wanted to double major in business and economics. She immersed herself early in Meredith culture and activities in order to find her place at the College. She is a Presidential Scholar, has served several years on student government, and was a White Iris Circle tour guide.

"When I enrolled at Meredith, I knew I was strong," said Carol. "But I had no idea how strong I could be."

Using all of the resources that Meredith offers, such as the Office of Career Planning (OCP), Carol felt set up for success. And it didn't take long at all for her to find her place.

With the help of the counselors in OCP, she perfected her resume and cover letters, began attending networking events and career fairs, and started researching companies she might be interested in working with. Because of her involvement on campus and hard work in the classroom, she was a prime candidate for internships as early as her sophomore year.

One of her professors recommended Carol for an externship with the Summit for Developing Leaders. She landed that role, and then took what she learned from it to an internship at MetLife in business analytics. "I really enjoyed the Fortune 500 setting," she said.

Then, Carol took an internship with Bandwidth in operations. As much as she loved the company, she knew she wanted to return to a larger organization after graduation. So she reached back out to her contacts at MetLife.

Turns out, MetLife had a position for her as a vendor management sepcialist and she was able to accept the job offer months before completing her degree.

"Meredith taught me to speak up, and I took that with me into my internships," said Carol. This ability to speak up is what allowed her to be successful in her many roles, despite the stigmas against young women in the workplace.

"Capitalizing on my strenghts, paired with my Meredith education, has prepared me to take on my career in the business world."