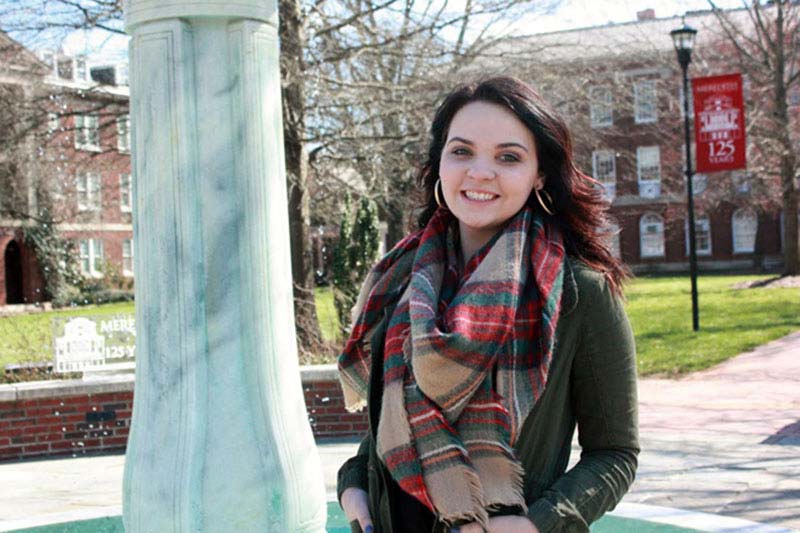 Being a freshman in college does not necessarily mean you are inexperienced, and it certainly doesn’t mean you’re not strong. For business administration major Caitlin Chastain, '19, quite the opposite is true. She came to Meredith intending to build on the strength she had developed as a Girl Scout who earned the organization's highest honor, the Gold Award.

Caitlin, a Girl Scout since age four, has gained tremendous people and leadership skills along with a love for community service and the organization.

“Girl Scouts has helped me become an all-around better individual. They empower young girls, which is amazing.”

Caitlin’s mother works in a nursing home in her hometown of Fayetteville, N.C. After spending many years with her mother on the job, Caitlin noticed a particular need and was inspired to take action.

“My grandfather passed away when I was 11, and he passed in his own home comfortably. The need at my mom’s work was for patients to have a home-like space to say final goodbyes to their families. Their rooms weren’t personal, and I wanted to give them that comforting area, as if they were in their own homes like my grandfather.”

Caitlin worked to create a cozy space for nursing home patients, renovating one of the rooms with supplies donated from local stores. She is proud to know that her efforts have brought happiness and comfort to those who have used the space she designed. After the “Tranquility Suite” opened in December, Caitlin and her project were profiled in an article in the Fayetteville Observer.

At Meredith, Caitlin is an active member of the 1891 Club and the Society for Human Resources Management. Caitlin also danced in her first Cornhuskin’ and will be taking part in the New York trip with the Business School in March 2016.

Caitlin describes Meredith as the only choice for her, and her experiences so far reinforce her decision to attend the College.

“Meredith is probably the only college in the nation where you can get this kind of experience. I don’t even think you can explain it. It’s like what we say, that you just have to experience it!”

After she completes her freshman year, Caitlin hopes to declare three minors to strengthen her academic experience: human resources, marketing, and fashion merchandising. She also anticipates becoming even more involved in campus life as she continues growing stronger at Meredith.

“I’m one of the luckiest people, I think, to come here and be a part of this awesome family. This is the school where I can follow my dreams.”

StrongPoints® helps every Meredith student build on her strengths. Find out how.