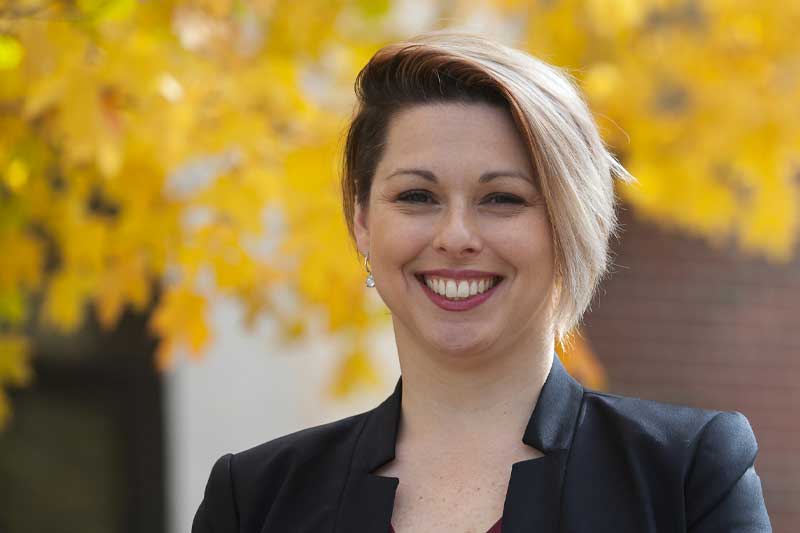 When Wings student Barbara Diamond, ‘20 came to Meredith, she thought she might study food and nutrition, but then she found herself in a chemistry class. By the end of her first semester, she had been approached by Sasha Ormond, associate professor of chemistry, about becoming a chemistry major. Her first response was “Why?” Barbara laughed. Recognizing something in Barbara that she had not yet recognized in herself, Ormond helped guide Barbara toward a new path. In the process, she developed a passion she did not know she had.

From day one, Diamond realized the entire Meredith community valued the work of students. Whether it was work being done in the Chemistry Department or through research, she saw hard work recognized by faculty and staff and each opportunity led to another.

“I was all about doing as much as I could,” said Barbara. “You are being seen. Everyone knows your name. Knowing that your hard work doesn’t go unappreciated made taking opportunities important to my Meredith experience.”

“When I changed my major to chemistry, I thought this is going to be really hard and as I went through the higher-level classes, I realized ‘I understand this’ and it really surprised me. At first, I thought I might not be smart enough and I’m not going to get this. When I look back, I’m like ‘wow’, I did all that. I studied Quantum Mechanics! I presented at a national conference! I couldn’t even imagine that I would be studying what I was studying when I started school.”

Receiving an award on Celebrating Student Achievement Day at the end of her freshman year built Barbara’s confidence and made her realize she should continue her new direction. The support from everyone on campus played a significant role in her increasing confidence. Advisers and professors were always encouraging her desire to try new things.

“The support is genuine and you can feel that they want you to do well after leaving Meredith.”

She also earned an invitation to join the Meredith chapter of the Alpha Sigma Lambda, a highly selective national honor society for nontraditional students pursuing their first undergraduate degree. Meredith’s Pi Theta chapter was the first one established at a women’s college in N.C.

Under the guidance of Cassandra Lilly, laboratory manager, Barbara performed a variety of jobs within the Chemistry Department. Those work experiences allowed for growth, the opportunity to develop a sense of her likes and dislikes in the chemistry area, and the opportunity to develop relationships with faculty, staff, and other students. A variety of responsibilities led her to become the Head TA/Lab Assistant for the Chemistry Department, tutoring, and assisting students of all levels.

“I enjoyed helping other people, especially with something that I understood and they were having trouble with. I wanted to help them understand it, too.”

Lilly also introduced Barbara to undergraduate research. For a sophomore year project, Barbara researched and developed a lab activity for use in General Chemistry coursework. The research became a springboard for her to attend and present at the National Conference for the American Chemical Society held in Orlando, Fla., her junior year. The lab activity is now used in the national curriculum for chemistry. Barbara attributes her participation at the conference with finding a graduate program that was the right fit for her interests. “Without attending the conference and networking with professors and students, I may not have found my fit for grad school.”

Barbara is quick to note that conducting research is important and informative, but presenting research was empowering. Presenting her research during Celebrating Student Achievement Day and at the Women’s Undergraduate Research Conference helped prepare her for presenting at the national level. The national conference provided a more impactful experience. “I was able to share what I did and people were interested. It’s a whole different experience when people care about what you are doing. This wasn’t something I did to be busy, this is something I did that was actually important and it affects people.”

While taking an Instrumental Analysis class with Matthew Poslusny, provost and professor of chemistry, Barbara said she“ fell in love with all the instruments. He made me realize my love for analytical chemistry.”  A second class with Poslusny enlightened Barbara further.

“I am really glad I took those classes, because they opened up my eyes to more I could do in chemistry. It gave me a direction.”

Guidance from Poslusny and others set Barbara on an extended path to graduate school at the University of Texas, Arlington where she has accepted a fully funded admission into their Ph.D. program. She anticipates the journey will take four or five more years. She knows she’s ready.

“I’ve learned so much, not just from my studies, but about myself - that I am prepared and feel confident enough to go to the next step and get my Ph.D.  I don’t have the thoughts that I shouldn’t do this or I’m not smart enough,” she said. “I’m going to do this. I have that confidence.”