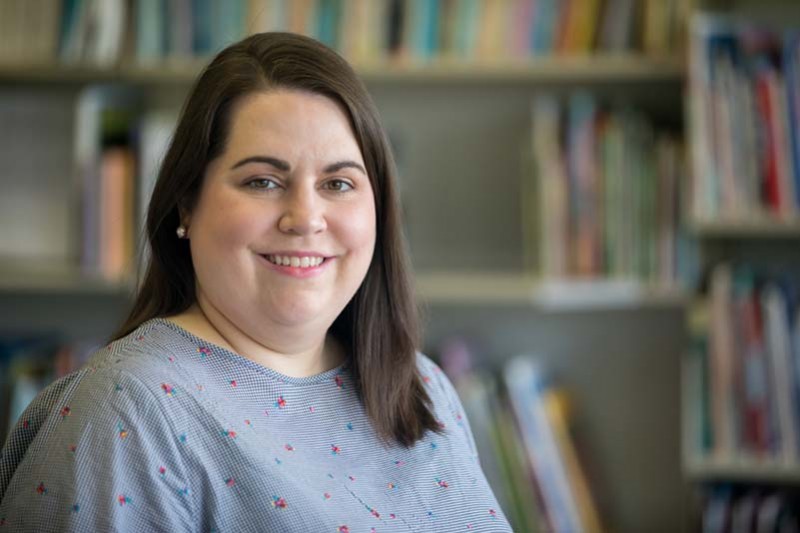 After working in the technology industry for ten years, Ashlee Little, ’18, M.A. in Teaching, decided it was time for a change. She enrolled in Meredith College’s Master of Arts in Teaching program, where she felt supported and empowered during her transition into a career in elementary education.

Ashlee graduated from Appalachian State University in 2008 with a B.S. in communication. Born and raised in Raleigh, she returned to the area after graduation and currently works as a project manager with Oak City Labs, a software development company based in Apex, North Carolina.

When Ashlee decided she wanted to make a career change, she considered graduate programs all over the state but ultimately chose Meredith. In addition to being convinced by Meredith’s strong relationship with the Wake County Public School System, where she eventually hopes to work, Ashlee said, “I attended Meredith because of the stellar reputation of the education program, convenient location, and flexible schedule that worked with my other commitments. Meredith felt right.”

Knowing she wanted to make her career change quickly rather than drawing it out, Ashlee decided to attend the graduate program full time, where she could finish in one-and-a-half years, as opposed to two-and-a-half years enrolled part time. “It’s a lot to balance, but I really wanted to make this change. Doing it in a year-and-a-half would mean getting to my goal faster. I decided I would power through to get to where I want to be.”

Though she was taking on a big challenge, Ashlee felt confident in her choice. “Transitioning to being an elementary school teacher from the tech industry is a complex process. When I took that risk, made that change, and turned that dream into a reality, I felt strong.”

Balancing her personal and professional obligations has been a challenge, but Ashlee has developed several skills throughout the process, all of which she feels will serve her as an educator. “The program has taught me how to be organized, to excel at things I thought were out of my reach, and has empowered me to take risks and try new things.”

One aspect of her Meredith education that Ashlee has appreciated is the emphasis on experiential learning. During the program, she has had a field placement each semester where, in addition to taking classes on campus, she works in a local school alongside teachers and students, conducting lessons and getting practical experience.

Meredith’s faculty have also contributed to Ashlee’s experience. She appreciated that her adviser took the time to get to know her as a person as well as helping her with the logistics of her education, and is comforted by knowing that she’ll have the support of her professors and the college even after she graduates.

“The faculty are all experts, but also have a great general understanding that helps us tie together math and English, social studies and the arts, and prepares us to be great educators. We leave not just with knowledge that’s deep, but also wide.”

As Ashlee prepares to move forward, she feels that the communication and organizational skills that she gained in her technology career will serve her well as a teacher. These skills give her the ability to educate children in using technology, which she believes will be crucial to preparing them for the job market of the future.

Ashlee believes Meredith’s M.A. in Teaching program is a great option for anyone looking to make a career change, not just students coming directly from an undergraduate program.

“In this experience, I’ve come to understand the value in taking risks and pursuing a passion. Some things are worth going outside of your comfort zone.”