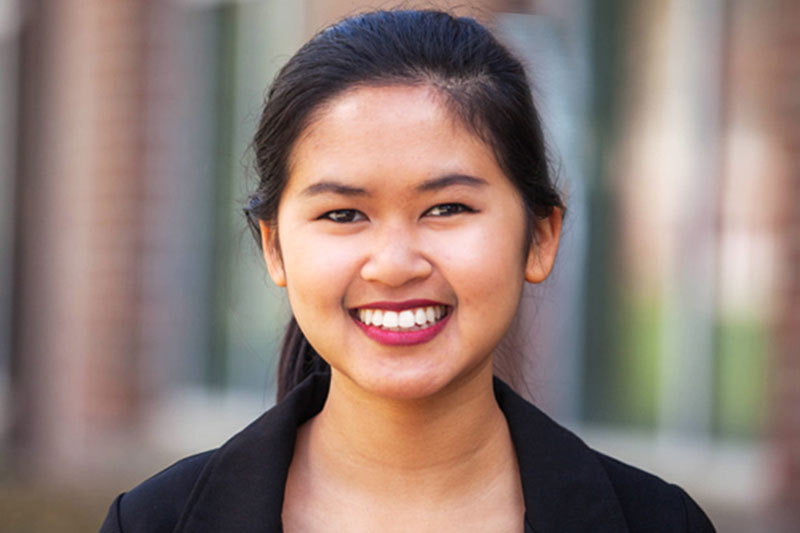 Six years ago Amy Poonnak, ’17, moved to the United States without knowing anything about American culture or even speaking the English language – one of the biggest challenges she has ever had to face.

“It was truly one of the most difficult times of my life,” said Amy. “However, I never gave up and I strived to learn and adapt to the American way of life in a relatively short period of time. That experience taught me that nothing is impossible to do if you set your mind to it.”

The Thailand native has adjusted well to life in America. She has also found her place at Meredith College where she has thrived as a biology major. The Honors Scholar is on her way to becoming a dentist, a career goal she has had for a long time.

“Being a biology major with a minor in chemistry has allowed me to explore the science field and consolidate my desire to become a dentist,” said Amy. “I am excited to use my science knowledge to help alleviate pain and change people’s lives through dentistry.”

Amy has always had a passion for science and that love has guided her desire to work in the healthcare field. Being a part of the Health Professions Advising Program has helped her focus on her desired career path and has assisted her in finding internships and shadowing opportunities within the field.

“One of my first internships was at a hospital in Thailand,” Amy said. “I spent two months volunteering at the local hospital within various departments such as the ER, outpatient care, and dental clinic. It was at this hospital’s dental clinic that my passion to change people’s lives through dentistry was amplified.”

Following her sophomore year, Amy was awarded the opportunity to participate in the Summer Medical and Dental Education Program (SMDEP) at the University of Louisville, which was sponsored by the Association of American Medical Colleges (AAMC), the Robert Wood Johnson Foundation, and the American Dental Education Association (ADEA). The program allowed her to gain deeper insight into dental school and the courses she completed helped equip her with skills for the upcoming year.

Aside from her internships and volunteer opportunities, Amy has been involved with the Meredith Health Professions Society (MHPS) since her freshman year. She served on the executive board during her junior and senior years in the roles of vice president and president, respectively.

“One of the most important life skills that I have learned is leadership,” Amy said. “Being the president of one of the largest organizations on campus has helped me become a better communicator and a stronger leader.”

During her time at Meredith, Amy volunteered at Wake Smiles Dental Clinic, a clinic that serves low-income and uninsured adults in Wake County. She also enjoys leading and coordinating events on campus such as the Bone Marrow Drive and canned food drives.

When Amy graduates from Meredith she will be heading towards the next phase of her journey to being a dentist when she arrives in Louisville, Ky., to attend the University of Louisville School of Dentistry.