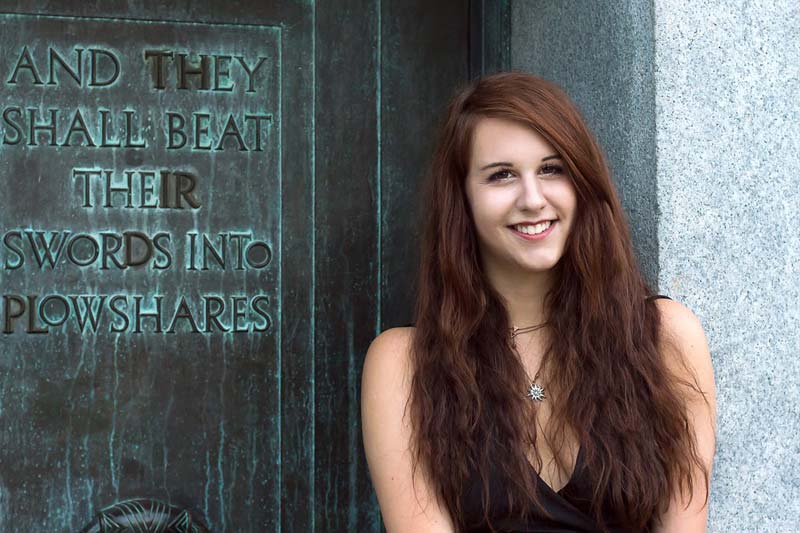 At Meredith, Adelie Salagnac, ’19 MBA, gained confidence and experience she will carry into a career in business.

Originally from Reims, France, Adelie spent a large part of her academic career abroad, having spent two years of her undergraduate studies at North Carolina State University where she earned her bachelor’s degree in business administration. Previously, she lived in Brazil and spent time in Spain and the United Kingdom while in high school.

Adelie chose to pursue graduate studies to set herself apart in the job market. “As a recent graduate it’s hard to stand out even with an international background. After getting my undergraduate degree, I felt like I had so much left to learn, and I wanted more in-depth knowledge.”

Adelie was drawn to Meredith partially because the MBA program offers a project management concentration, and partially for its small size. “I’ve always been at bigger schools. I wanted to build connections and be more than just another student. I wanted a sense of community.”

She also wanted to stay in Raleigh, as she enjoyed the city’s music scene. “I didn’t know about the music industry in this city until I moved here. We have two record labels in the area and a lot of cool places and new bands.”

At first, balancing her studies, job, and internship posed a challenge to Adelie, but as she developed new study habits she came to feel more comfortable. “While going back to school wasn't easy, it was the best decision I’ve ever made. I loved my time here.”

At Meredith, Adelie felt supported by both the faculty and her peers. And the MBA program’s focus on experiential learning made Adelie feel prepared for her future career.

“What I learned the most from class wasn’t the textbook. It was the class discussions and the group work, which resemble what you do in the business world,” Adelie said. “I was put in situations that let me figure out how I would respond in real life and what sort of things I’d like to take on in the future. I also built a strong network of peers and faculty. The program made me feel like I could succeed.”

Adelie also appreciated the diversity she found at Meredith. “There were people from a lot of different backgrounds in my classes – from other cities, states, and countries, as well as recent graduates and people who had been working for years. I learned and grew from interacting with them.”

The Office of International Students became a significant resource and support system for her.

“I got to meet people from my MBA program and country, but also from other programs and all over the world. As an international student, it’s important to have that community.”

Coming into the program directly after completing her undergraduate degree made Adelie nervous, as many people gain work experience before pursuing an MBA. Her concerns were quickly soothed by the classroom environment and the support of her classmates. “I felt I was always respected in my classes, even by students with more experience than I had. I was told I was creative and innovative. Having a fresh view is important in the business world.”

Adelie interned with a local independent record label in Hillsborough, N.C., giving her business experience in the music industry, and also interned in Meredith's Marketing Department.

Having so much international experience and speaking four different languages – Spanish, Portuguese, French, and English – Adelie believes her adaptability will serve her in her future career. “I’ve learned to be comfortable in most situations and in different settings and cultures. It’s a good asset to have in today’s world.”

Eventually, Adelie hopes to build a career with a large, multicultural, multi-national company. She is well on her way to that goal; after she graduated she joined the Walt Disney Company for an internship in operations. She credits her Meredith education with helping her secure the position.

"I am hoping to stay with the company for the long haul in a management position, either in the States or somewhere else in the world. There are so many different opportunities with Disney."