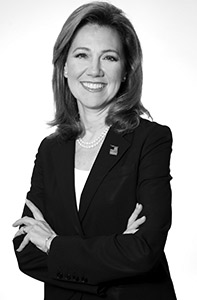 Silda Wall Spitzer gave the public-phase Kick Off and the Closing Addresses for The Campaign for Meredith, Meredith’s then-largest Capital Campaign (2004 and 2007, respectively). She delivered the College’s Commencement Address in 2012.

Her career has spanned the private, non-profit and public sectors as she has worked to promote progress on green/sustainability issues, youth service/education, and women’s leadership/human rights. Wall Spitzer is currently a Founding Investor and Principal at NewWorld Capital, an environmental opportunities investment firm. She is also Co-Founder, CEO and Publisher of the digital marketplace and magazine NewYorkStatesOfMind.com. She was Managing Director at woman-owned Metropolitan Capital Advisors from October 2008 to December 2011. As First Lady of New York State, Wall Spitzer launched the Greening of the Mansion Initiative and otherwise worked to reduce fossil energy use by promoting green buildings, alternative energy, and local food sources. Her I LIVE NY program engaged constituents to create livable communities and sustainable jobs. A Harvard Law School graduate, Wall Spitzer began her 10-year legal career specializing in M&A and corporate finance and then focused on international transactions. Wall Spitzer frequently speaks on topics related to environmental opportunities, impact investing, and sustainability, as well as women’s leadership and financial literacy; she has co-authored several essays, including “Impact Investing: A Problem-Driven Approach” and “The Pleasures and Perils of Private Company Investing.”

Among her non-profit leadership roles, Wall Spitzer is Vice-Chair of the Urban Green Council, Founding Chair of Children for Children (now generationOn, the youth service enterprise of Points of Light), Founding Co-Chair of Project Cicero, Board member of The Center for Law, Brain and Behavior, Advisory Board member for The Sustainable Endowments Institute, Honorary Trustee of No Bully and member of the Council on Foreign Relations, the Economic Club of New York and the New York State and City Bar Associations. She was honored to serve as Chair of the New York State Commission on Volunteering and Service.