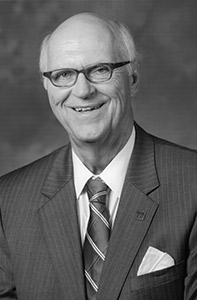 Ewell received his A.B. in Political Science from UNC-Chapel Hill in 1968. While at UNC, he was inducted into Phi Beta Kappa and served as a Legislative Intern with the N.C. General Assembly (1967). He received his J.D. from Wake Forest University School of Law in 1971, where he was a Babcock Scholar and President of the Student Bar Association.