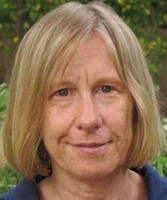 Rebecca Duncan has taught at Meredith since 1997.  Students who drop by to talk with her will find a nice comfy chair in her office, a place to sink in and take a calming breath.  They may have to wait a second, though, while she clears away the latest stack of books, magazines and other writing samples that she’s cued up for “teaching moments.”  On a recent day there was a newspaper photograph of traditional wedding dresses in India – to share with the Postcolonial Literature class, along with an edgy black and white ad for the Text and Image course.  Every spring the English majors present a playful skit about their professors, and one year’s performance included the line, “Her office is a disaster, but at writing she’s the master!”

Ph.D. in British Literature at the Florida State University
M.A. in English at University of South Florida
M.A. in International Affairs and B.A. in history at Ohio University.  She has studied and taught in Brazil, Bolivia, and Morocco.

“Power, Gender and Mythmaking in Naomi Alderman’s The Power” at the Popular Culture Association conference in Washington, D.C. in April 2019.

“Faith and Change in Morocco.” Rev. of Year of the Elephant: A Moroccan Woman’s Journey toward Independence, by Leila Abouzeid.  The Washington Times. 8 January 2010.

“A Critical History of Sense and Sensibility.”  In Lambdin, Laura and Robert C. Lambdin.  A Companion to Jane Austen Studies.  Westport, CN:  Greenwood, 2000, 14-26.

“Digging and Drilling in Fracktown, USA”   The Huffington Post, 1 November 2013.

“People Can Change; Home Should Not.”  The Huffington Post, 1 January 2013