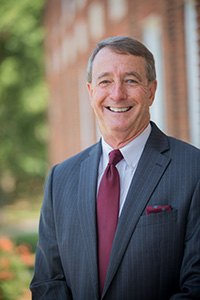 Barton oversaw Beyond Strong │The Campaign for Meredith, the largest fundraising campaign in the history of Meredith College.  The Campaign raised $90,466.720, surpassing the $75 million goal by more than $15 million.  Beyond Strong created incredible opportunities for students and the entire campus community at one of the largest women’s colleges in the southeast.

Barton has more than 30 years of experience in higher education. Prior to joining Meredith College, Barton served as associate vice chancellor of alumni relations at NC State University. Among his most recent accomplishments, Barton led efforts to grow membership in NC State’s Alumni Association from 4,000 to more than 22,000 and helped the Alumni Association raise $22 million to build the Dorothy and Roy Park Alumni Center.