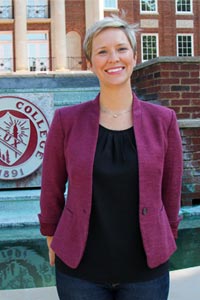 Dr. Prevatt is a Meredith alum. She obtained a Master’s degree in Clinical Psychology from East Carolina University. After working in several different settings, she opened a private practice with a specialization in reproductive mental health and worked primarily with women and families experiencing infertility and perinatal mood disorders. Dr. Prevatt was prompted to return to graduate school by two factors: 1) she realized her passion for teaching undergraduate students while working as an adjunct professor at Meredith, and 2) she discovered an interest in research when her clinical work in the community necessitated an empirical examination. Dr. Prevatt’s current research interests broadly focus on developing evidence-based interventions for improving maternal mental health. She is particularly interested in examining the needs and experiences of mothers who belong to marginalized groups. Her research has been highlighted by NPR and cited in Vogue magazine. She is thrilled to join the psychology faculty at Meredith where she will get to come full-circle from student to professor.