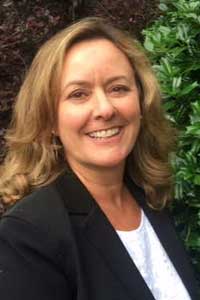 Alma Hoffmann grew up in Raleigh, N.C., with Meredith College as her second home. From piano and dance recitals to First Baptist fellowships, Hoffmann spent a lot of time at Meredith. Her mother, JoEllen Ammons, was a trustee at Meredith for many years. Hoffmann received her B.A. in elementary education at UNC-Chapel Hill in 1987, and began teaching in Wake County Public Schools. At the same time, she attended Meredith in the evenings and received her Master of Education with a K-12 reading concentration in 1989.

She then began working for the National Inventors Hall of Fame as the regional coordinator of camp invention for North Carolina. For six years, she organized and directed week-long summer science camps for kids all over North Carolina. In 2006, Hoffmann started her own company called Write More Education Resources. She wrote a top-selling resource book for teachers titled Writing Works and other activity books, folders and games, and she created hands-on, integrated writing camps for children grades first through eighth.

Hoffmann has served as a deacon at her church, Trinity Baptist, and she has taught Sunday School and leads the Music Makers Choir.

She and her husband, John, live in Raleigh and have four children.